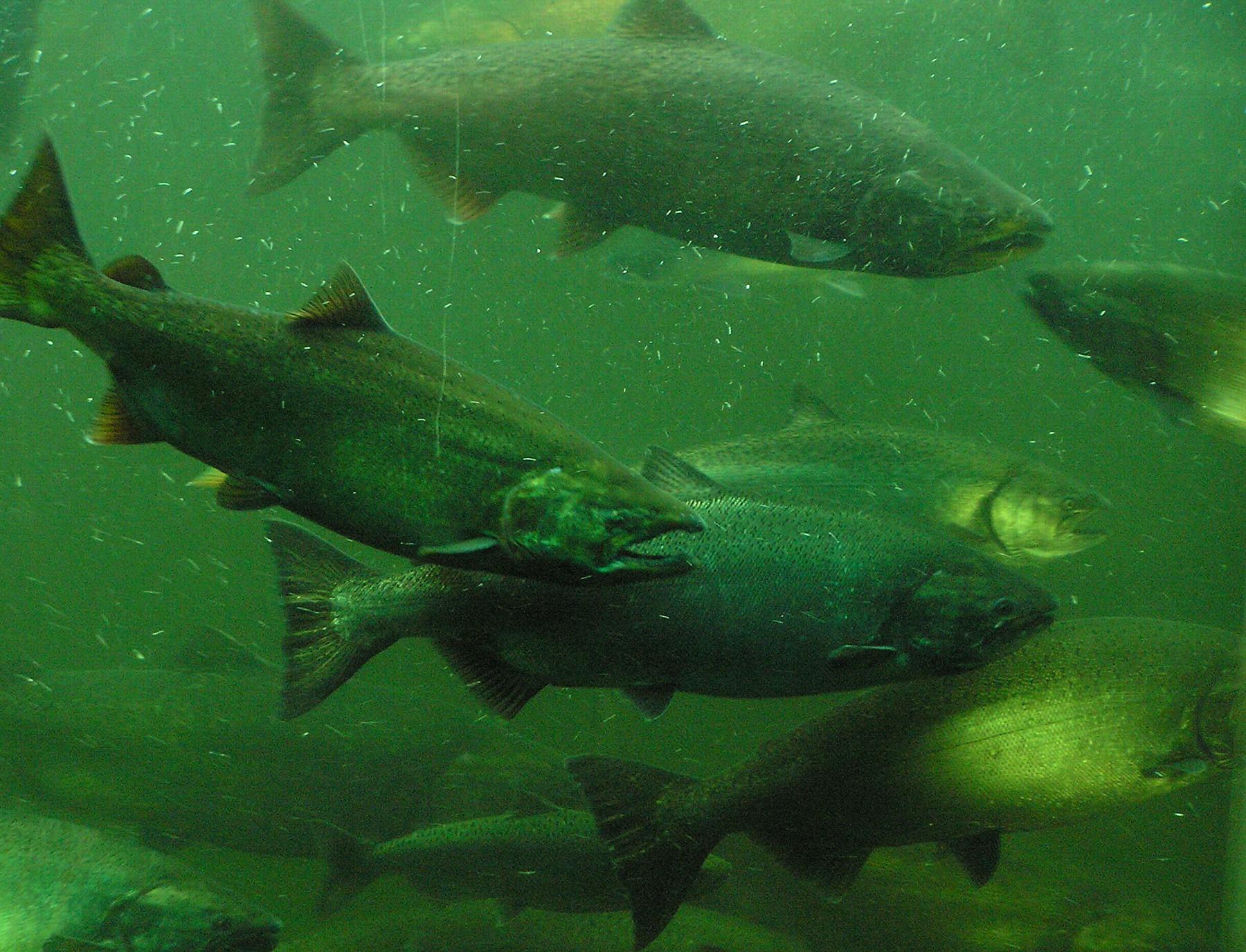 At the heart of Seattle’s Ballard neighborhood is one of the most unique parks in the region. The Hiram M. Chittenden Locks attracts tourists and locals alike. People line up to watch boats move up and down between Puget Sound and Lake Washington in a narrow concrete and metal channel that is, in effect, a kind of marine elevator. It was built with the Ship Canal that replumbed the region at the turn of the last century. The Locks opened in 1917. Along the south side is a fish ladder that has windows where you can see salmon as they migrate through.

This Season’s Chinook Run One Of The Lowest On Record

In the late summer and fall, especially when the tide is coming in, dozens of giant chinook salmon might be visible, along with sockeye and coho swimming upstream on their way to spawning grounds in Issaquah to the north, or the Cedar River to the south. But sometimes the ladder is eerily empty, as was the case one recent afternoon. 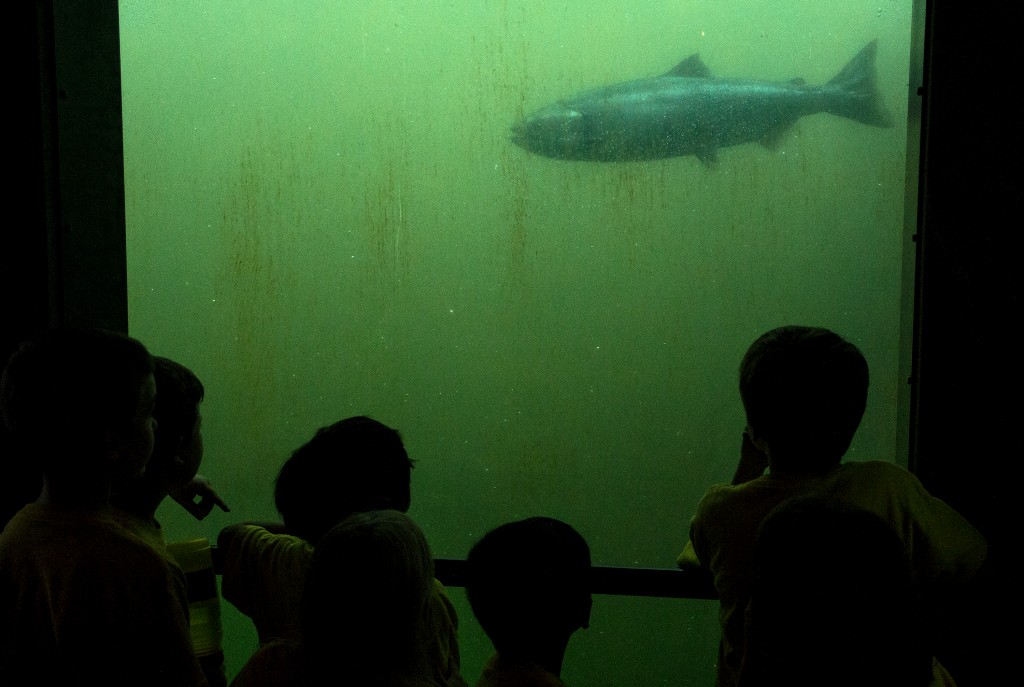 Swimming fish are seen through a viewing window at the Hiram M. Chittenden Locks. (Justin Steyer/KPLU)

“There certainly aren’t many fish in there right now,” says Eric Warner, a research biologist with the Muckleshoot Indian Tribe. Warner has been tracking the fish for decades using sonic tags. “The chinook run is a lot lower than we had hoped for this year. It’s not entirely done, but it’s one of the lowest runs — second or third lowest since we started counting at the Locks in 1995.”

The lowest was 1995, when just about 4,000 chinook were counted. That’s even after the addition of millions of fry from a hatchery in Issaquah. A good year would return 10,000 to 15,000, Warner says. But this year, computer models suggest perhaps 5,400 will make it past the Locks and eventually return to their native spawning grounds to reproduce.

All kinds of factors are in play, including everything from conditions on the river where they spawn — for instance, a small flood can knock out thousands of fish eggs in an instant — to ocean conditions affecting fish health and food supply.

Warner says lots of improvements have come in since the listing of chinook as an endangered species along with several other fish runs in 1999. At the Locks, for example, special smolt slides were installed in 2007 to provide safer passage for juvenile fish on their way out to sea. And the Army Corps of Engineers, which operates the facility, adjusted the rate at which the large lock is filled, and added strobe lights to keep fish away from hazardous areas.

The Corps also rebuilt the fish ladder in 1976. But it’s still one of the most treacherous obstacles the threatened salmon face on their way upstream. The instinctive drive of the fish to press on compels them to move through it anyway.

“The entrance can be fairly skinny,” Warner says. “And so we see marks on some of the chinook that we tag just from getting scraped on their way into the fish ladder. And the juveniles going out, they end up going through some of the plumbing and they get more than scraped up; they get decimated.”

A chinook salmon is seen at the Hiram M. Chittenden Locks. (Courtesy of Eric Warner)

Even without what amounts to a labyrinth of concrete to get through, Warner says the shift from Puget Sound to Lake Washington presents a huge shock to the fish, which have spent three to five years in cold ocean water before starting their journey home.

“People tend to forget how much salmon need cold water. They’re at about 55 degrees (F) for years, which would give someone hypothermia and kill them within six hours,” Warner says.
After a summer’s worth of warming, the water in the lake is about 72 degrees.

“So you see fish milling around outside of the downstream entrance to the fish ladder. And not to anthropomorphize, but it looks like they’re saying, ‘Do we really have to do that? It’s so hot,’” Warner says.

When salmon pause at the base of the Locks, they become easy pickings for sea lions and seals who line up to feast on the buffet.

Since the 1990s, authorities have tried all kinds of methods to discourage the predators, including relocation programs, rubber bullets and underwater firecrackers. They even tried taste aversion conditioning, which involved feeding sea lions recently-killed fish with bitter lithium chloride capsules inside. Despite those efforts, it’s still pretty likely that if fish are coming through the fish ladder, you’ll see seals and sea lions at the locks, too.

“They’re obviously looking for a meal on one of the salmon,” Warner says of a seal he spots swimming below the Locks, even on this day, when so few fish are visible. Predators may know that the fish stall out and often stay underwater, hesitating to enter the shocking conditions ahead for a long time.

Not Your Typical Salmon Run

Warner says once the fish do get through the Locks, they often remain just beyond the other side for weeks. 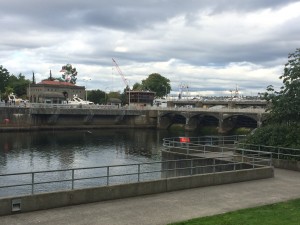 “We’ve found from our tracking that they can be there for two to three weeks on average. And the record for our tracking was 53 days,” Warner says. “We thought that fish was dead.”

He says once it decided to move on, the fish bolted and made it through the Ship Canal, Lake Washington, Lake Sammamish and back to Issaquah hatchery very quickly.

But he worries that the long waiting periods in the warm water could damage the eggs of a female.

“They’re basically stuck in a very small area for a very long time, and we think it’s largely because the conditions are so inhospitable for them to go upstream,” Warner says.

There have been discussions about engineering fixes to lower temperatures in the Ship Canal to make the migration easier, but no practical methods have emerged thus far. As a result, the Locks remain the biggest test for Lake Washington chinook, even ones that reach 20 to 30 pounds as adults. Sometimes it seems like a miracle that any get back to spawning grounds at all, Warner says.

“Especially coming here on a crowded day, it seems like we’re about as far removed from your typical salmon run as it’s possible to get,” he says.