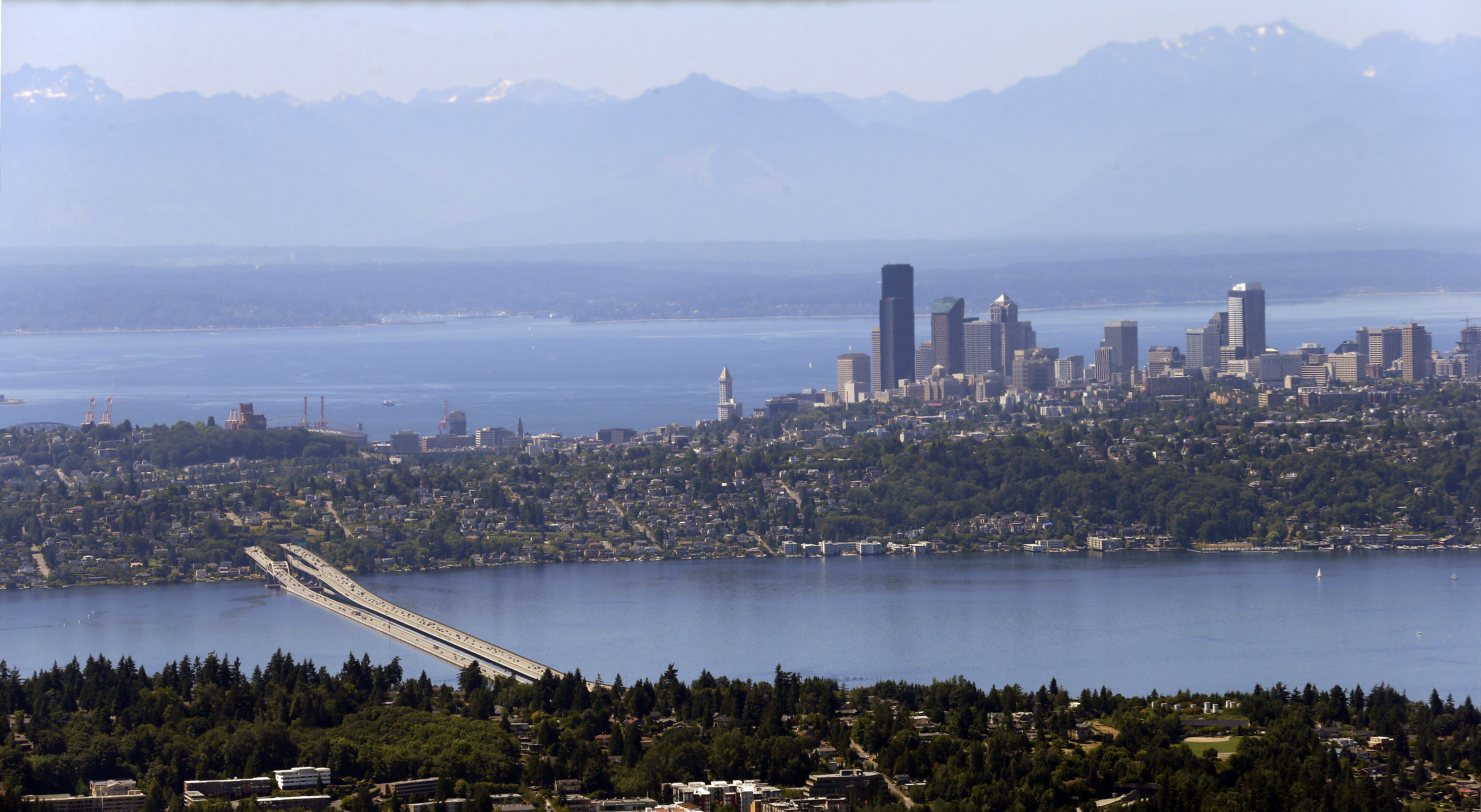 The Olympic mountains and the Puget Sound are seen beyond downtown Seattle, with Lake Washington, the I-90 floating bridge and Mercer Island in the foreground. (Elaine Thompson/AP Photo)

Puget Sound is one of the most enchanting bodies of water in the Pacific Northwest. Framed by mountains to the east and west, its physical beauty is part of what attracts new people to the region every year.

A total of 115 towns and cities surround this deep inland fjord. But the Sound’s geography is also part of what makes it toxic for fish that migrate through it.

All the polluted runoff and treated sewage from the dense population around the Sound get trapped in and don’t flush out, making it similar to a dirty bathtub that never gets cleaned. Residue from prescription drugs and flame retardants, pesticides and heavy metals are among the contaminants.

“The water within Puget Sound doesn’t exchange as freely with the waters in the open Pacific Ocean,” says Sandie O’Neill, a research biologist with Washington State Department of Fish and Wildlife. “And there are lots of fjords further north in British Columbia where you also don’t get that exchange, but the difference is they’re not developed.”

Sail out to Shilshole Bay late in the day, and a sea of lights twinkles from shore. These lights signal the crush of humanity that has built atop the fish habitat here. As a result of the development, the fish that swim through Puget Sound “experience a much more urbanized setting that any other fish up and down the West Coast,” says O’Neill. That translates into degraded habitats, limits on their food supply and more concentrated exposure to toxics from human activities.

‘You Can’t Always See The Contaminants’

O’Neill studies the effects of toxics on chinook salmon. Her work has focused primarily on juvenile fish, which she says are more vulnerable to damage than migrating adult fish.

“The fish that have come down through the river and out through Lake Washington and the [Ballard] Locks and gone on to the Pacific Ocean have been exposed to all kinds of contaminants that can affect their growth, make them more susceptible to disease, things like that,” O’Neill says. “That can really reduce their fat content, their size.”

Smaller, weaker fish are more likely to fall prey to predators. And these chemicals can affect fish survival even in what might look like beautifully restored habitat.

“You can’t always see the contaminants that are in the water,” O’Neill says.

For example, dust-containing residue from toxic flame retardants (such as now-banned PBDEs) goes from people’s couches and clothing into our wastewater. O’Neill says it persists at levels that are harmful to fish and can affect their survival rates.

And very, very small levels of chemicals called PAHs, which are associated with the exhaust from people’s cars, can affect the development of the heart. These often enter the water after rain, which washes residue from streets into gutters and storm drains that empty into the Sound.

“So they can be exposed to really, really low concentrations and you can have quite serious effects, especially on a developing embryo,” she says, for example, by changing the shape of the heart to make it less efficient.

“It doesn’t kill you off right away, but it can affect your swimming speed and ultimately your marine survival,” O’Neill says.

A Detrimental Hurdle At A Critical Time

For adult fish that are returning to their spawning grounds, the clock is ticking. They’re on a kind of pilgrimage. Once they reach sexual maturity and start heading home to their natal waters, they stop eating much. And anything that slows or delays them can keep them from having the energy to survive long enough to make it home and spawn; they’re sometimes found dead in streams not far from their spawning grounds, before they reproduce.

In coho salmon, the cause of this so-called pre-spawn mortality has been linked to runoff from roads. Scientists from the federal Northwest Fisheries Science Center and the Suquamish Tribe immersed adult coho in pure runoff from the State Route 520 bridge and documented its effects.

“Concentrated stormwater can actually kill juvenile fish outright and also fish coming back, coho in particular, as adults can die before they get a chance to spawn,” O’Neill says.

A neurotoxin in the water causes them to lose equilibrium, become disoriented and flop around, she says.

“They are swimming upside down in the water and they basically die before they get a chance to lay their eggs,” O’Neill says, adding that the effects on chinook have not been documented, and those fish may prove less vulnerable.

Many Chemicals With Many Pathways To Cause Injury

O’Neill says subjecting any fish to toxic contaminants in the water they swim through is worse than, say, forcing a human to live or work in a room filled with cigarette smoke. She says that’s primarily one contaminant causing harm through one physical pathway (nicotine going through the lungs), whereas salmon appear to be harmed by a combination of many contaminants entering their systems via multiple pathways.

“For juvenile salmon in particular, they have to migrate through this soup of a whole different type of chemicals. So in some ways it’s quite a bit worse, because it’s many different chemicals with many different pathways to cause injury.”

O’Neill has sampled fish flesh and found the toxics from long-banned chemicals have built up and persist as they are passed through the food chain.

“Puget Sound fish in general have three to five times higher levels of certain contaminants — PCBs, flame retardants — than other salmon populations up and down the coast,” she says.

She says part of the cause is the tub-like geography of the Sound. But there is also a large population of chinook, probably as much as 30 percent, that have evolved to reside in Puget Sound year-round. They pick up the highest levels of contaminants. And adult chinook are the preferred source of food for endangered orca whales, so they get exposed as well.

“So the J pod that spends more time in Puget Sound actually has higher levels of contamination than L and K pod,” O’Neill says.

Despite the disheartening nature of her research, O’Neill says there are plenty of bright spots to keep her motivated.

“I think people are so much more aware now than they ever have been about how their behaviors affect the quality and the health of the sound,” she says. Drivers know they should take their cars to car washes where the stormwater will be filtered on its way to the storm drain. Homeowners are installing rain gardens on their properties, reducing pesticide use, fixing leaky septic tanks and scooping pet waste to keep waste out of storm drains.

And on a higher level, she points to the work of the state’s Puget Sound Partnership, which she says provides a regional governance structure.

“So you have a lot of different groups getting together to try to solve problems. And there are some successes,” she says.

“That’s a great thing,” she says. “And there’s great developments with stormwater technology. We’re starting to see that we can treat stormwater and get some of these toxics out.  So I think there’s plenty of reasons for hope, and that’s just from a toxics perspective.”

In addition, O’Neill says changes to physical habitat for salmon are cause for optimism, from fish passage improvements at Landsburg Dam on the Cedar River where Lake Washington chinook spawn, to near-shore improvements in the Nisqually River delta and estuaries along the Snohomish and Skagit rivers, to the largest dam removal ever in the U.S. on the Elwha River near Port Angeles.

“I think there’s a strong will in the region to make this a better place, and I think it will be,” O’Neill says.