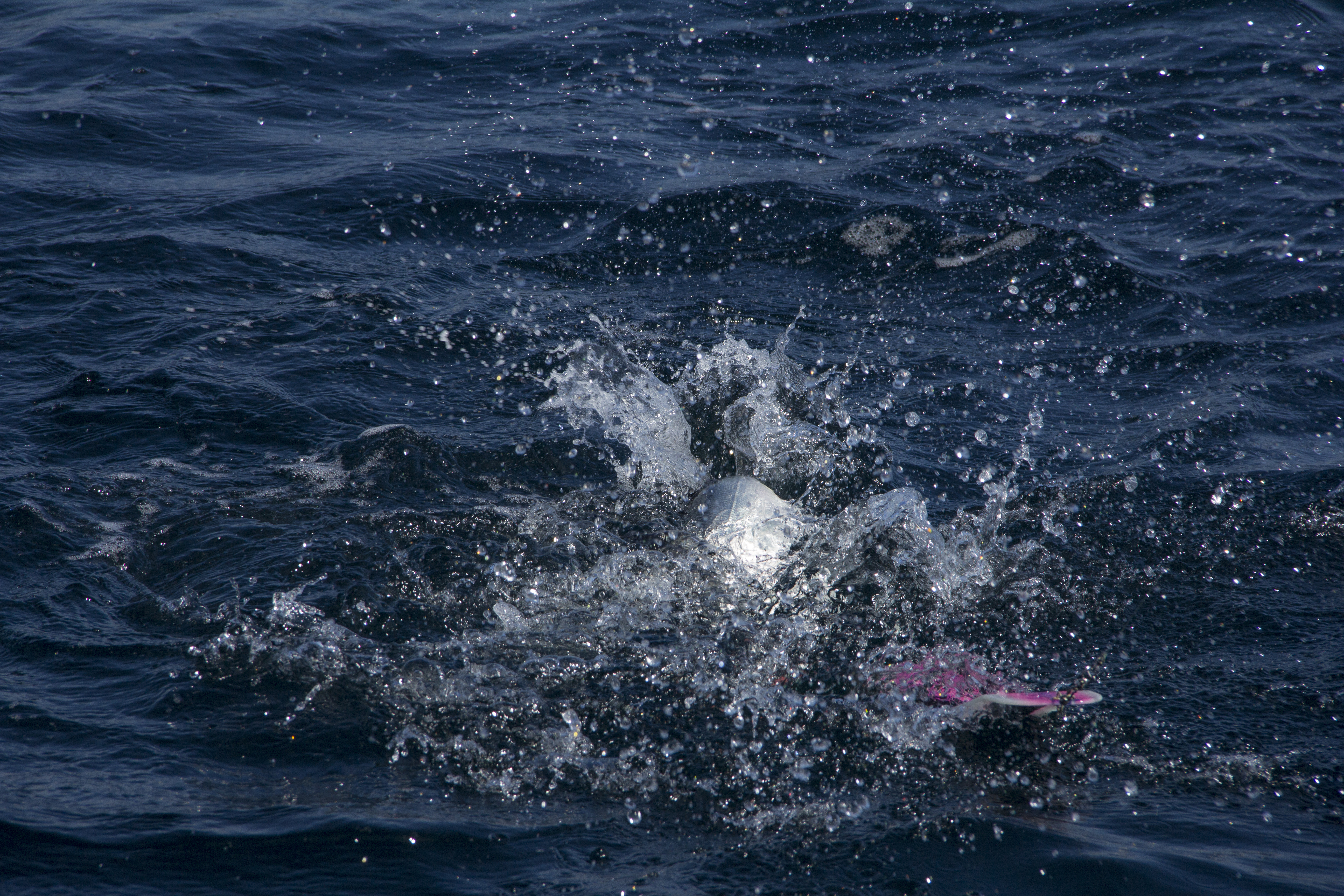 A salmon jumps in the Pacific Ocean. (Justin Steyer/KPLU) 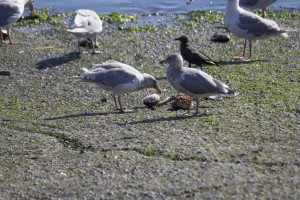 Seagulls peck at the remains of the day’s catch. (Justin Steyer/KPLU)

As soon as you arrive in Sekiu, Washington, you’re hit with a whiff of salty ocean air laced with the unmistakable smell of fresh fish. The scent fills your nostrils as the gulls mew nearby, fighting for the remains of the day’s catch in the protective cove.

Located 20 miles east of Neah Bay by car, the fishing village has a long reputation for good salmon fishing. It’s also where we pick up the trail of the Lake Washington chinook. The subset of the Puget Sound salmon were listed as threatened under the Endangered Species Act in 1999 and traced here by scientists who tag them.

The fish spend their adult lives in this open ocean before heading home to spawn in the Cedar River or in Bear Creek, or the state hatchery in Issaquah. 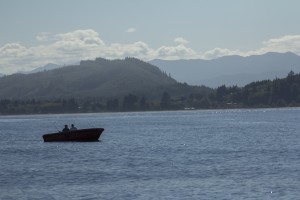 Pulling into Sekiu, one might expect a bustling fishing village with flotillas of boats hooking plenty of salmon, perhaps because the summer’s headlines have touted a record run of Columbia River chinook.

Towns like Westport have been booming with the projected return of 1.5 million chinook, also known as king salmon. Anglers at Buoy 10 on the river this year reportedly spent more time looking for a place to set up their gear than they did reaching daily limits, thanks to successful management of the dams, hatcheries and habitat down south.

Also often mentioned in the reports are favorable ocean conditions that have allowed more adult fish from the Columbia River system to survive. But those ocean conditions aren’t doing much for the fishing in Sekiu.

“It’s surprisingly quiet. Usually one of the peak times of the year is right now,” says veteran guide Roy Morris, a lifelong salmon fisherman who has kept a charter boat at the docks in Sekiu for 20 years.

Morris says there has been a steady decline in fish stocks. And this year, he says everyone in Sekiu is reporting “one of the lowest year of catches for salmon, particularly chinook.” 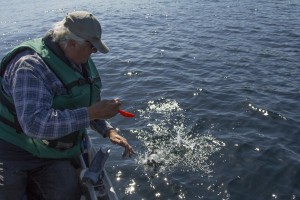 One reason, he suspects, is the unusually warm water, which he says has been about 5 degrees hotter than normal.

“We’ve been seeing it on our instruments on our boat all year long. We couldn’t believe our instruments were correct when we saw 58 degrees, where usually it’s 49, 52,” he says. “And that changes the conditions for feed for the salmon as well as their desire to be in that warmer water.”

The warm water off the Northwest coast, which is linked to one of the hottest summers the region has ever seen, is what’s believed to have caused a record number of sockeye to bypass Sekiu and many other ports in Washington in favor of cooler waters in Canada. Morris says it probably hasn’t helped the chinook here, either.

“It is surprising, because I know there’s many people working together to try to improve conditions and survival for salmon, but it’s up and down from year to year within a decade, [and] this year is some of the lowest catches for Puget Sound chinook that we’ve ever witnessed,” he says.

‘We Have Only One Chinook In The Freezer’

Ocean conditions are a bit of a black box for scientists; they know that huge percentages of the young salmon that leave freshwater never return as adults, but information about why is scarce. The recent launch of an international research effort, the Salish Sea Marine Survival Project, seeks to fill the information gap.

But for Morris, it’s just one of many causes. He cites as another cause the influence of hatchery fish that are released in droves then feed on limited food sources “like a herd of sheep” while wild fish trickle out gradually. But he links most of the fish’s decline to urbanization and development that destroys fish habitat.

He remembers the days of his youth in the 1950s and ‘60s when salmon fishing was such a popular family vacation that you could hardly find a place to park your boat in places like Ilwaco.

“Because it came with a bounty of fish that were canned and smoked and frozen, so that after your vacation you ended up with two or three hundred pounds of salmon,” he says. “Now, we have only one chinook in the freezer, where last year, we had 15, so we’ll be fishing hard [for the rest of the season].”

Why The Chinook Is King

Chinook hold a special status in the world of sport fishing. 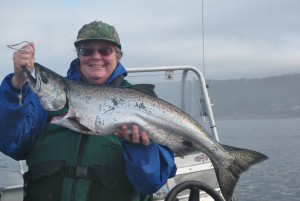 Roy Morris’ wife, Nancy Messmer, holds up a chinook salmon she caught off the coast of Sekiu, Washington. (Courtesy of Nancy Messmer)

“[It’s] called the king because it’s the biggest and the most spectacular,” Morris says, noting that sometime his guests get frightened by how long and hard the fish will pull on a line. Morris calls them “the long distance runners.” He notes that Columbia River chinook traverse nearly the entire state and reach Canada before coming back home. And his favorites, the Puget Sound chinook, even climb mountains.

“They go right to the North Cascades,” he says. And they enjoy iconic status, with tourists coming from all over to seek them out. They’re also some of the tastiest, with firm flesh, he says, “because it chored higher and higher into the watersheds.”

And they get harder to catch at this time of year, when their bodies start changing with physiology that signals it’s time for them to head to home waters and spawn. They lose interest in food, presenting extra challenges for anglers who use special lures and techniques to hook them.

“There’s slang talk like ‘slack jaw’ and more formal talk is ‘waiting fish.’ They’re not so much chowing down to build their body,” he says. “Reproductive capabilities are being developed more than muscle tissue. And as that chemistry changes, their desire to return to the natal stream and spawn overrides their desire to hunt and feed.”

‘I’m Here As A Witness To The Process’

Morris is not just a seasoned salmon fisherman; he’s exceptionally passionate about saving the fish. He says he caught his first salmon when he was 5, helped his grandson catch one at age 4 and wants that lineage to continue. But does he ever think it would be better to stop hunting an endangered species? Yes, he says, but as long as the fishing is allowed, he wants to be part of it.

“I’m here as a witness to the process,” he says. “I’m not fishing greedily to catch the last salmon, but I am participating in the seasons and open times that you can enjoy the sport.”

By being out on the water 100 days a year and also volunteering on boards as a representative of sport fishermen, he feels his perspective is an important contribution to augment data sets collected by government agencies. And he sees part of his role as educating the public about endangered fish and the issues they face.

‘If You Give’em A Chance, They Will Survive’

“The chinook is one of the more fragile of the spectrum of salmon in the Northwest,” Morris says. He remembers when they were first listed 15 years ago and the fishery was closed. He thought it might never reopen, that their declines had gone too far. 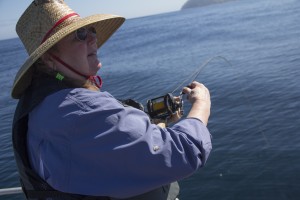 Nancy Messmer looks out at her line. (Justin Steyer/KPLU)

“But where barriers are removed, they’re amazing the way that they’ll try to fight for their survival if they’re given half a chance,” he says.

One only needs to look to Issaquah Creek and its Salmon Days festival for evidence, he says.  In places where habitat has been restored and fish protected with policies, the fish do come back.

“At one time, those stocks had dwindled to just such small numbers, people had never even seen them or knew they were in the river. Now they throng and there’s a celebration … with booths and festivals, and people hanging over bridges,” he says. “That just is testimony to that if you give’em a chance, they will survive.”

And he sees another ray of hope in the recent return of chinook to the Elwha River, where the nation’s largest dam removal has just been completed.

“We saw fish in a habitat that there had not been wild salmon in for 100 years,” he says. “It’s just evidence that fish can return if they’re given a chance and proper conditions.”